Home>Drinks>Spirits>Rum>Ron Zacapa, the story behind the rum 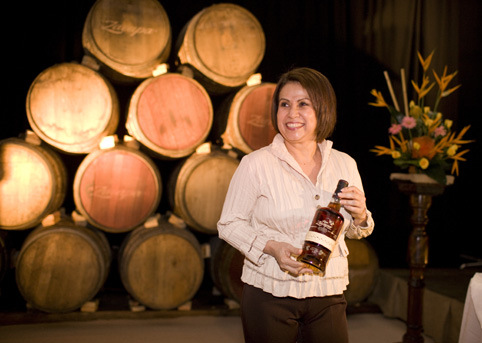 “When you make rum just to make rum, you make Ron Zacapa.”

Those would be famous last words if they weren’t the first thing that Master Blender Lorena Vasquez told me about Ron Zacapa, the Guatemalan rum brand established in 1976 to celebrate the centenary of the city of Zacapa. I met Lorena at Rumfest to learn more about the rum, which had been growing in popularity amongst bartenders even before its official UK launch.

Unlike most rums currently on the market, which are made from molasses, Ron Zacapa is made from “virgin honey”. This is the syrup containing 72% sugar, produced by heating and evaporating pressed sugar cane juice. Three grades of sugar can be extracted from virgin honey leaving molasses, which only has a sugar content of 48-50%, as a natural by-product. Making rum from molasses was effectively the way to monetise the wastage from the sugar production process while making rum from virgin honey produces only rum.

When I asked Lorena what Ron Zacapa was like, she tells me: “Zacapa is like meeting up with an old friend – there’s good and bad moments. It’s friendly, sophisticated and complex and there’s always something new to discover”.

And it’s true. When you try it for the first time, you immediately discover its sweetness compared to other sipping rums. And as you slowly sup on it, you get hints of vanilla, chocolate and toffee.

There are currently three rums in the Ron Zacapa family: 15, 23 and XO. They have all been produced using an adapted Solera system and have been aged between 5-15 years, 6-23 years and 6-25 years respectively. The Solera system is a system of blending and ageing which creates the complex bouquet of aromas found in the rum.

After being aged in various barrels, the rum will have taken on different characteristics in terms of flavour and aroma. Because of the blending with aged rums, the result is both vibrantly alive like a young rum and deeply smooth like an aged rum. After the final barrel, Pedro Ximenez for the 15 and 23 and French oak for the XO, the rum is stored in used white American oak barrels for further ageing. The used barrels won’t add further characteristics to the profile of the rum so can be used for ageing. For Ron Zacapa, all of this takes place at an altitude of 2,300 above sea level which Lorena believes adds an unique quality to the rum.

When the rums are ready to be bottled after the whole ageing process, they are blended one final time to ensure the consistency in flavour of the rum. Once they are bottled the rums stops ageing and should reach the consumer as they had left the distillery. After that long and complicated process, some truly exceptional rums are produced.

The 15 is said to be soft and sweet to start, with peach, dried tropical fruits and a hint of nutmeg. The 23 has notes of honey, butterscotch, spiced oak and raisined fruit. The XO tastes of dark cherry chocolate, dried fruits and sweet oak spices. I’m not sure my palate was quite sensitive enough to detect the complexity in the blends but the smoothness of the drinks is unquestionable.

Lorena, whose highly sensitive nose has been bothered by the scent of curry served in the café across the room, likes Zacapa “neat and with good company”. At a push, she finally revealed that she enjoys the 15 for cocktails, 23 with food and XO to finish a meal. She also revealed that she has been experimenting on a new addition to the family, but it was top secret.

I guess we’ll just have to wait and see.