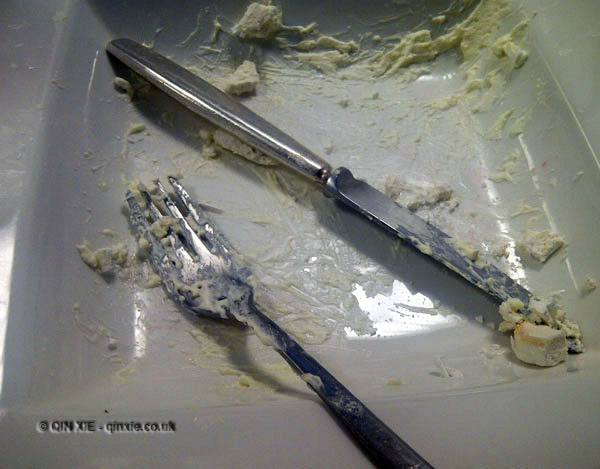 Cooking for 50 is not something you want to think about let alone do in the first three weeks of a cheffing course. But there’s nothing quite like being thrown in at the deep end to acclimatise.

Within a week of starting at Leiths, we were informed that we had to cook for 50 in groups of four. Panic ensued – we were still practically navigating around the kitchens with orientation gear, how will we cope?

The pre-assigned groups were a mixture of those who had started the previous term and the new recruits. That was a saving grace really since the incumbents were briefed last term so theoretically someone in the group knows what they’re doing; we hope. Even so, it’s not the easiest exercise when none of us were familiar with each other, how we worked or had ever catered to such quantities with restrictions.

We had to design a two course menu, with a budget of just over £200, which was both seasonal and demonstrated sufficient skills to serve up to 50 people. All the preparation and cooking had to be done between 9.30am and 12.30pm and cleaning finished by 2pm so we could attend the afternoon demonstrations. There were also other rules like the food can’t be delivered to Leiths and we had to cater to people with special dietary requirements. For the exercise, this seemed like a lot of restrictions but I guess that’s the nature of catering in real life.

The group I was in was made up of two newbies and two incumbents. We were lucky in some respects because we weren’t one of the first groups to cook so at least we had the opportunity to see what other people were cooking and also taste the food that was being cooked for us. The results leading up to when we were due to cook had been hugely varied and some were reassuring while others were daunting.

We opted for a chicken, leek and cider pie recipe from the Pieminister Cookbook to be served in a de-constructed fashion. Instead of the pastry in the book, we decided to make our own rough puff pastry shells to sit on top of the filling when we serve it. There was also a side of potato and sweet potato mash and blanched spinach. For the dessert, we went with a chocolate mousse with shards of almond praline. Catering for special diets, we were going to create small portions of the pie without gluten and dairy and serve it without the rough puff pie topping. The alternative dessert was caramel oranges.

Things are never so straightforward of course.

Owing to the short supply of spinach, kale was used instead. The eggs, fridge cold in the morning, were too cool for the mousse and started to curdle. The caramel for the praline was always in danger of burning. The first batch of pastry started life as an amalgamation of shortcrust and flaky pastry before we realised our mistake and switched to rough puff. But true to the nature of pastry making, it was taking as long as it possibly could and certainly much longer than we had anticipated. The oranges for the alternative dessert went astray too. Throughout the process, it was a constant juggle of pots, pans and hob space. And the washing up, it was a mountain that grew exponentially.

But in the end, with a slight delay in service, the kale was fine, the mousse was rescued, the caramel set perfectly and the pastry puffed up. It wasn’t perfect but we got there and the feedback had been mostly positive. And despite struggling between the free-from options and the standard portions, we managed to keep the two separate, no doubt much to the delight of those eating them.

The oranges never did turned up though.