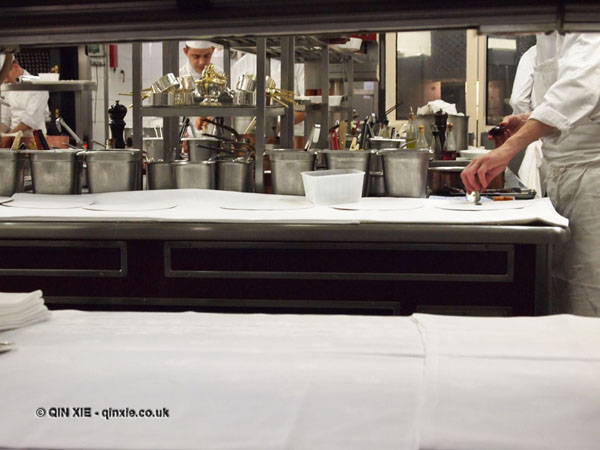 The night before a big event, one wouldn’t expect anything less than butterflies. For some reason, I feel like I’m about to walk the plank. Even the title to this post for example, the only words that went round in my head were “last”, “final”, “the end”…

Ok, perhaps that was a little on the side of histrionic. But the last three weeks have been a bit of a rollercoaster.

The session with the Leiths teacher went along swimmingly – pastries (short crust, rich short crust, rough puff, marzipan) and sauces (crème Anglais, caramel) were covered with ease in just under half a day. Having managed to squeeze in all the required reading too, I was feeling rather well prepared. I did wonder afterwards why I was so nervous about the whole thing, but I guess it was just one of those things.

Over the rest of the Christmas season, I cooked through the list of recommended recipes with some interesting results. My parents were in the process of re-doing the kitchen so things were in a state of dishevel. I was surprised to find how important a full kitchen was to classical-style cooking so having a slightly distorted version to work with proved to be an interesting challenge. Still, at the end of it, I got the Rangemaster I always wanted even if I didn’t get much of a chance to road-test it.

I did realise that perhaps the best Christmas dinner tip shouldn’t be preparation, because I had no time to prepare, but rather cook according to what your kitchen can manage. I had read a great article about chefs who delivered Michelin quality meals from comparatively minuscule kitchens. Of course they were highly organised and did their prep work before service but even more important was the menu design which meant that the dishes that they were turning out could actually be efficiently done given time and space constraints. It was inspiring in some respects, given the circumstances, but no help with cooking through a list of pre-requisites.

Back in London after re-reading all the notes and ticking off all the recipes last week, I was at last feeling well prepared. Or at least as well prepared as I could be. During the sleepless nights, my mind turned once again to what I was going to do after the course.

I remembered years ago before I re-trained as a journalist, before I even thought about making that move in fact, I had stumbled on a blog penned by someone under the name of Lennie Nash (now revealed to be Alex Watts). Chef Sandwich was all about training to be a chef after “life as a hack”. It was interesting not only because of the people he saw and the things he did but also it was a piece of something real, someone doing something to change their life. Recently I also stumbled upon Dave Ahern, now Head Chef at Ben’s Canteen, who had been writing about his experiences of going from food writing to cheffing.

It got me thinking about cheffing again – could I do it? Could I handle the hours, atmosphere, competition, criticism and all of the other things that came with the territory? Am I too couth? Or is that simply elitism? I suppose now I have six more months to consider those questions, though I did decide I needed to spend some time in a restaurant kitchen. Which one? I don’t know yet.

I was reminded too, of a dream I had when I was 16, of owning a little bistro by the sea when I had retired, decorated with my collection of custom-made guitars. I would cook at a leisurely pace because it was a leisurely sort of place. It would have been a vanity project of course and I would never have made any money out of it. But I wanted to provide a space where people could really catch up with friends and family accompanied by good food.

I guess in some respects that’s what food has always been about for me, a hearty medium for relationships. And In the end, it’s good to be reminded of the beginning and that it’s the beginning of another journey.