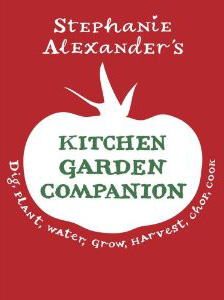 If a book could be wholesome, this book would be it.

The Kitchen Garden Companion isn’t a cookbook or a gardening bible but rather a journey from the garden to the kitchen. At a sizeable 752 pages, it’s certainly a comprehensive introduction to growing your own and cooking with homegrown ingredients.

Stephanie Alexander started out as a librarian from Australia with no designs to become a chef. After a period of travelling, she decided to open her first restaurant Jamaica House in 1964. The restaurant became an immediate success but after a few years it was closed due to personal reasons. Alexander went back to libraries before opening a second restaurant called Stephanie’s in 1976. This time it became a professional and personal success and remained open for over 20 years serving good food, testing new culinary techniques and training new chefs.

Her passion for food led her to develop her first Kitchen Garden for Collingwood College, Melbourne, in 2001. Later, she set up the Stephanie Alexander Kitchen Garden Foundation and secured funding from the Australian government to create kitchen gardens in schools across Australia. It is this work which became the basis for ‘The Kitchen Garden Companion‘, a book which she hopes will help families to “garden together, cook together and above all, eat together”.

The book is split into introduction, recipes and appendices. The introduction is then broken down into cooking and gardening sections. Along with the basics section in the appendices, almost everything that a novice cook and gardener might need are covered; everything from raised growing beds and composting to braising and sauteing.

The main section of the book is an alphabetised list of ingredients that can be grown by the average cook. At the beginning of each ingredient section, there is a small, clear guide to growing the plant. This includes information on growing conditions and special considerations. The rest of the ingredient section is a selection of recipes showcasing the ingredient.

Of course, it’s not all potatoes and tomatoes. There are also a couple of unusual ingredients like nettles to make nettle and buckwheat crèpes and scented geraniums for raspberry and rose-scented geranium sorbet. There is even a section on growing eggs. Ok, it’s actually about raising chickens for eggs. In case you thought there was such a thing as an egg plant, there is an ingredient section dedicated to the egg-plant. Though this is of course for aubergine rather than the plant where eggs come from.

At the end of the book there is a food index and a gardening index, just in case you needed anything else. All in all, this book makes an excellent starter for anyone interested in taking up growing your own and is certainly full of handy tips.