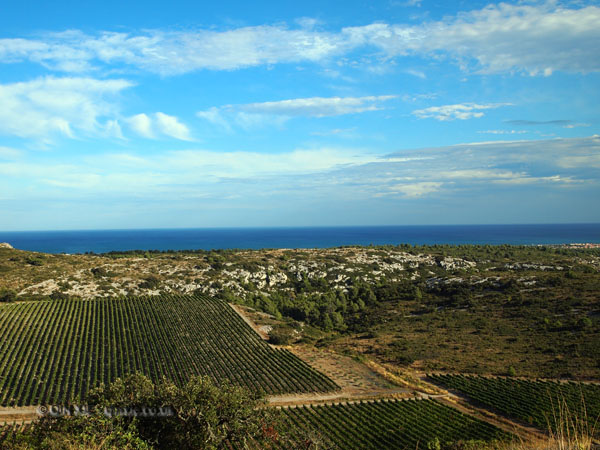 If you’re not a rugby fan then you might be scratching your head on this one but the chances are, you’ll probably have tried a wine from one of his estates before. They tend to be mid to high priced and pretty good quality.

At the moment, Château de l’Hospitalet is perhaps one of the most developed for wine tourism in the region. Investment has been made towards developing accommodation, restaurant, shopping and even art on-site. It also benefits from being close to the sea, though it gets pretty windy on the coast.

On the wine side of things, Château de l’Hospitalet is one of the smaller estates and produces around 16k bottles per year. It’s a working number that’s set to expand as the estate grows.

The wine cellar is open for tours and tastings with seasonal staff drafted in from around the world. Case in point, the girl who led my tasting was from Wales.

The tasting started with the Art de Vivre La Clape 2012, a refreshingly acidic white. It’s citrusy but well rounded with an expressive finish.

In the same category was a rosé, also named Art de Vivre La Clape 2012. The pale salmon coloured wine was less acidic and much more fruity with strawberries on the finish.

The red in the same category, the Art de Vivre La Clape 2011, was made with the same blend as the rosé – Syrah, Grenache and Mourvedre. The slightly older vintage displayed red fruits and smoky overtones. It still feels herbaceous and young though.

On the pricey side was the l’Hospitalitas La Clape 2011. This deep garnet number was elegant and velvety smooth with lots of blackberries coming through. It was already drinking very well but has great potential for ageing too.