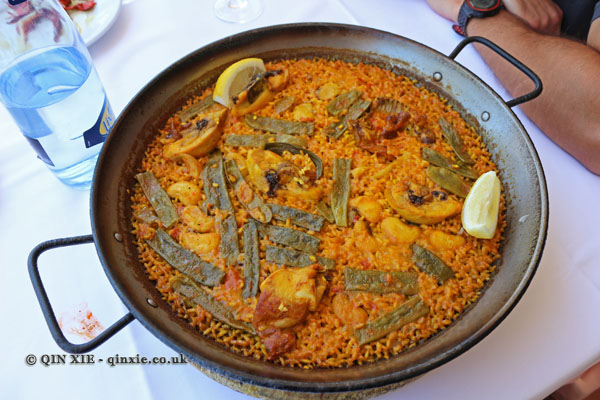 Menu from a paella lunch at the beach-side century-old seafood and rice restaurant La Pepica in Valencia (rough English translations bold and in brackets):

La Pepica, a paella restaurant on the beach-front in Valencia, alongside a whole row of other restaurants, has been visited by locals, tourists and celebrities alike. It’s even been inside one of Hemingway’s books after the author visited it.

I had lunch there on a very warm day and with a whole pan of paella for two, it was a lot of food to stomach.

The food is simple and good but it’s probably not going to rock your world. But it’s a little bit of history in some respects because of all the legends who’ve dined there already. And also because Valencia was where paella was invented in the first place.

Although very touristy, it’s also very traditional with an open kitchen that you can peek into and see dozens of paellas being made at the same time.