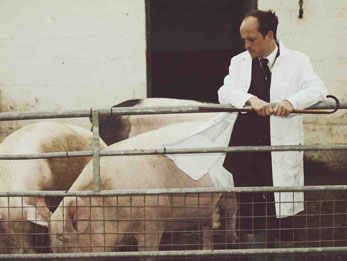 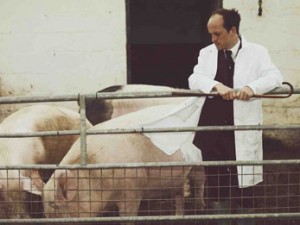 Belly of pork, that was my intended plan for Sunday lunch. That was before I went to see the live rendition of Matthew Herbert‘s One Pig project at the Royal Opera House on Friday. It was part of the Deloitte Ignite 2011, a festival curated by Mike Figgis, and I was totally prepared to change my mind about pork by the end of the performance.

When I was first introduced to the project, I was perplexed but also intrigued. As the final part in a trilogy of “One” albums, the others being “One One” and “One Club”, it was described as an aural biography of a farm animal from birth to death and beyond. While Matthew Herbert is known for his use of samples to create music, it was difficult to imagine how pig sounds could be transformed into a whole album without it sounding like raw recordings. Added to that is the involvement of a fine score of chefs in the project, including Jason Atherton, Fergus Henderson and Paul Rankin.

The involvement of the pig was certainly prominent, but its incorporation wasn’t in fact intrusive.

Prior to the performance, Herbert discussed the project in a conversation with Tristram Stuart, the author of Waste. Though the discussion began with “One Pig”, it soon evolved into the ethical killing of animals, vegetarianism, keeping pets, consumer power and ultimately what we can do to bring about change to the food system; perhaps just some of the points of debate that Herbert wanted to evoke from the project.

He also took the opportunity to introduce the set of their performance, the little intricate details that would be missed otherwise, like the specially commissioned drum covered with the skin from the pig and the styharp constructed from Gametrak strings.

The performance itself was intense. I watched with intrigue as the men came on stage one by one, each stonking their hi-tech instruments with vigor, and live recorded their samples before remixing them with the pre-recorded pig sounds into hyper-energised tracks.

The man in the sty, inevitably the focal point of the stage, is Yann Seznec, a Franco-American living in Edinburgh who created the styharp. At intervals, he changed his white lab coat from plain to ones marked with SEP, OCT, NOV, DEC and finally JAN to indicate the change in seasons and change in tracks. His pen-ultimate coat, a plain blood red one, indicated the death of the pig after just five months – a surprisingly short amount of time. At this point the chef, Rosie Sykes, appeared on stage to cook some meaty feast. A rotating fan behind her bellowed the aromas across the studio, accompanying the sounds created by the five men, and engulfing the audience’s senses.

It was the rollercoaster of changing pace that created musical emotions, making it quite easy to imagine the life of that pig. The pig sounds rode in parallel from the squeals of birth, grunts of partial-maturity, the hair-raising grind of carving its carcass to the final satisfied savour of its meat. If once in a while you stopped to take stock, it was only to wonder at the surreality of the whole experience. For the briefest of moments, you ponder on what you’re listening to and then you’re pulled right back in.

The show finishes with a vocal track from Herbert – a gentle release of tensions built up throughout the performance. As my nostrils continued to fill up with the delicious aromas of the cooked pork, all I could think of was, what are they going to do with the feast that Sykes has just created?