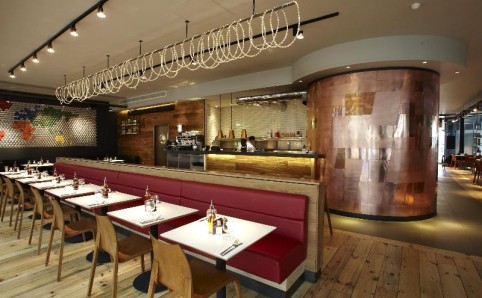 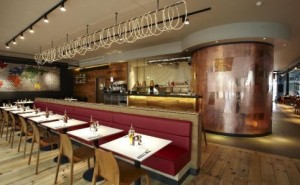 To mark the opening of Fire and Stone‘s fifth restaurant, I was invited to try out Fire and Stone’s extensive pizza menu. I’ve often wandered past their Covent Garden branch but never had the opportunity to go in; it always looked so busy and I’m always hurrying from here to there. I’ve read reviews that say all sorts about their combination of flavours, but then I wonder how right those are if they’re doing so well all the time. Naturally, I was intrigued to see what they had in store for us.

The little demonstration took place in the new restaurant at Old Spitalfields Market. Of course by little, I mean something quite impressive really. The key ingredients that went into making Fire and Stone pizzas were laid out across three tables, akin to that of a farmers market except I was without a basket. To the right, is a sample of meats from big joints of beef to minced lamb; across the middle is a selection of cold meats, cheeses and olives; and to the left is a selection of vegetables and fresh herbs that would make Jamie Oliver proud.

Clearly Fire and Stone felt that simply looking at the ingredients wasn’t enough to tickle the senses and I’m inclined to agree. As they guided us through the ingredients, the very polite staff offered us a selection of pizzas from their menu for tasting.

Two of them stood out for me, Acapulco and Koh Samui.

The Acapulco is really a beef burrito in a pizza and it works. Imagine a tortilla wrap loaded with incredible chilli beef, mozzarella, sour cream and guacamole; except you don’t have to worry about it falling out the other end because it’s all flat. Perhaps I’m just biased because I’m all about the burrito.

The Koh Samui sounded quite dubious when I was browsing the menu. As a pizza traditionalist, curry sauce on a pizza just sounds like it should not happen. Admittedly it’s a bit like a vegetable korma with naan but it’s so incredibly fresh that the vegetables still have bite.

Maybe I’ve cheated a little by choosing two pizzas that are basically a re-hash of other dishes, the way that I always imagined pancakes and French toast to be interchangeable ingredient-wise. But however questionable the ingredients, potatoes included, it actually taste pretty good. I am a little disappointed by the lack of rocket on the menu though. After the assault on my taste buds, it would be quite nice just to have a simple smoked salmon and rocket pizza. But then again, I suppose that’s not really what Fire and Stone had set out to do with their pizzas.

After a small tour to see the dough boys rolling out the bases, we were invited to get stuck into making our favourites from the menu. Head Chef Stuart made one to demonstrate, but it was exponentially harder when the time came to make our own. While chomping on my hard labour, I also sampled the desserts on the menu as well as a selection of wines, smoothies and milkshakes. Given this all took place before 11.30am, a whole two hours since I had breakfast, I was feeling more than a little nauseated.

Luckily I was able to escape with my barely touched pizza and a bag of Fire and Stone ingredients without too much damage. I am happy to report that back at the office at a suitable lunching hour, the pizza wasn’t half bad.