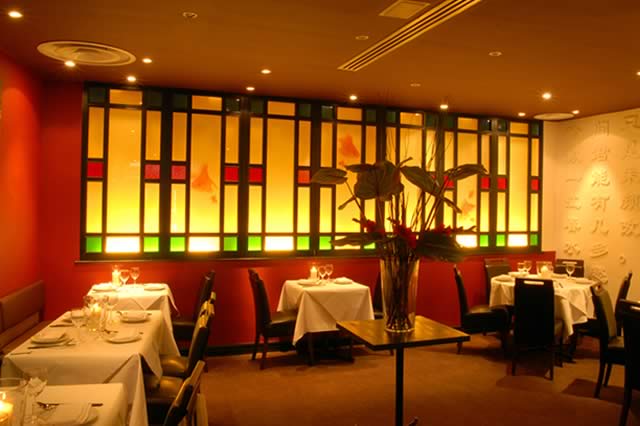 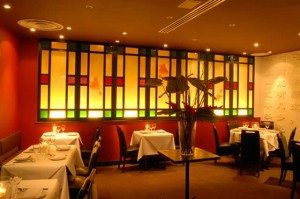 Given the mix of ramens and bentos with the dim sums and noodles, you could be forgiven for thinking that Goldfish, City, was just another pan-Asian restaurant. In some respects, it is. But it promises to serve modern Chinese cuisine and dim sum on their menu, a curious combination you might think. So just how “modern” is the latest offering from the Goldfish family?

Well, all the usual Chinese restaurant classics seemed to be present and correct but there was also a European twist about them.

Being particular about my Chinese, it wasn’t hard to whittle down the menu to a select few dishes. Not that the menu doesn’t offer a decent selection though, especially if you’re just popping in for lunch. The set menus were turned down for being too standard restaurant Chinese as I wanted to try anything that looked, well, different.

First up was the “Chew Yim” calamari. This bit of Cantonese meant nothing to me until a quick google told me that it’s the done thing for hip Asian restaurants these days. It turned out to be squid fried in super light batter tossed with a mix of chillies and spring onion. That’s right, they’ve put an Asian twist on the calamari by making it spicy and it was clearly done very well. Each piece invited me to eat another, savouring its subtle flavour cooked to tender perfection.

Can mocha ribs, stir fry chicken, green fry rice with eggs and yuzu juice, or seasonal greens turn it around?

Well the green fry rice with eggs was just your bog standard egg fried rice with spring onion and coriander. There’s really nothing alien about the green bit although it does take the egg fried rice to the next level. The seasonal greens worked well as a side and the stir fry chicken was a little on the salty side.

The mocha ribs are what I really want to talk about. Red meat with chocolate sauce I know and love, coffee sauces match desserts splendidly, but mocha ribs? This was something new and it certainly brought intrigue to the table. Despite having eaten plenty of ribs before, sampling these felt like an initiation – I was entirely unsure of what to expect.

At first bite they tasted just like standard ribs: meaty, juicy, delicious. But hang on, where was the mocha? I felt cheated. Is this yet another ploy by those cunning marketeers?

I tried another just to make sure there was no “mo” or “cha”. There wasn’t.

I rolled my eyes and took a sip of the lemonade. Just then I got a little something, a hint of bitterness or just something unexpected, something that’s not quite the same. This warranted another examination of the sauce. Yes, there was definitely something, but is it mocha? Soon I had made my way through half a plate of ribs with the sole purpose of finding that elusive flavour on my taste buds. As it turns out, those were rather addictive in their own right. So what does it matter anyway?

All in all, Goldfish has done well. The modernity is perhaps only demonstrated through the westernised menu but the flavours aren’t bad at all. And if it’s good enough for the vicars of the local cathedral sitting behind me… One thing to note, if you’re considering lunch in an hour then expect to be asking for the bill before you finish the starters.