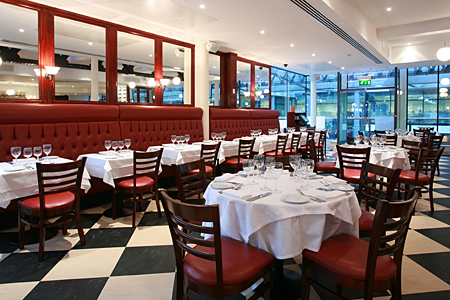 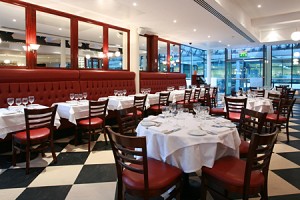 There’s something profoundly old-fashioned about Le Bouchon Breton as I discovered on a recent visit with a friend.

With plush red seating and a well stocked high bar, it was the epitome of retro French glamour. Outside, little oases of botany separated deck furniture and a live band played gently in the background, all a part of the Breton’s August jazz nights. It almost gave the illusion that we weren’t sitting on the wooden floored second level of Old Spitalfield Market.

Naturally, the gentleman choses the fillet steak. He tells me it’s possibly one of the top five steaks he’s had in his life, cooked precisely how he liked it.

Switching from my usual sirloin to try something decidedly French, pan-fried veal sweetbread with tartar sauce caught my eye, along with a side of fries. For sweetbread virgins, it is the thymus gland of an animal and as offal goes, the veal sweetbread is considered a bit of a delicacy. The sweetbread was very tender with a texture similar to heart or liver but smoother and richer like paté. It also didn’t have the usual strong taste of offal which was rather refreshing.

Confusingly, the sweetbread was served on top of a slice of toasted bread causing a moment of perplexity. Has I misread the menu and order pan-fried veal on sweetbread? Confusion aside, the sweetbread was certainly different and rather moreish. However, the slice of bread was slightly burnt and very soggy and better fries have been had elsewhere. It seems I had passed on the opportunity of having medium rare perfection to have something that was really quite average.

The wine was brilliantly matched to the food and also very enjoyable on its own so bravo to the sommelier. It would have been nice to know what we were drinking but alas, only the gentleman gets to see the label. Although in fact with the wine separate in its own ice bucket and the glasses regularly topped up by the sommelier, neither of us saw very much of the bottle.

For the summer season, Le Bouchon Breton has also launched a series of ice cream coupés. Having eyed up the coupés on the next table, my friend decided that he could handle one all to himself so a Frozen Mess and a Frozen Smith were ordered. When you spot vanilla seeds in the ice cream, you know that it’s going to be seriously good. Both of the coupés looked spectacular but there was a mountain of cream to get through to uncover the ice cream and even then, as my friend laments, there was an unfortunate shortage of meringue.

Overall, the experience was not unpleasant. The meal was on the pricier side of things but not unreasonable. Perhaps the fabulous wine even made up for it. However, if our seats were the cosy ones inside along with the jazz accompaniment then so much the better. It might have gotten a little heated but that can only add to the authenticity of the atmosphere.