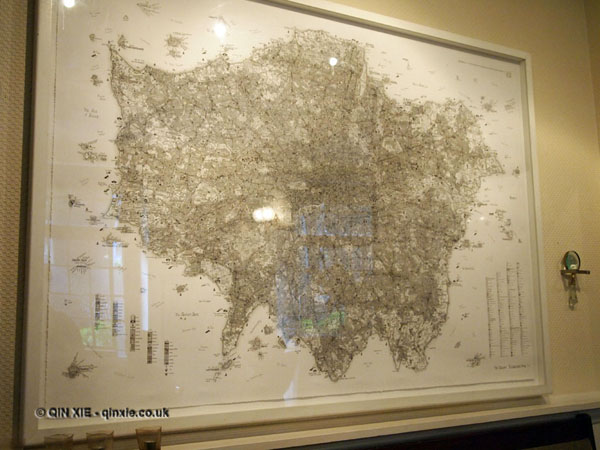 Standing on the platform at Queenstown Road Station, I had two choices.

If I got on the train, which was approaching on my right, I head towards the safety of my own home or, if I needed to, out of London altogether. Or I could take the train that was arriving to my left, which will begin my journey towards the set of the previous night’s turmoil. It was the height of the London riots, you see, and while not immersed in the rioting areas, I felt too close for comfort.

I considered my options carefully. Or at least as carefully as I could given the time constraints. And then in that split second between the doors closing to one train and opening to the other, I decided.

I was far too curious about the Charles Lamb to miss out on an evening of “foraged” ingredients matched to London beers. Riot or not.

I’ve been invited to the Charles Lamb on several occasions in the past but unfortunately due to one thing or another, had never been able to make it. Tucked away in a quiet corner of Angel, on Elia Street, it couldn’t be further from the Islington riot scene I envisaged. The sun was just beginning to set as I arrived but it was warm enough for the regulars to sit under the awning and enjoy a quiet pint or two. Quite idyllic really. Inside is a buzzier atmosphere with locals chatting over their beers by the bar or enjoying a nibble at the cosy tables. Even Tony Conigliaro, cocktail extraordinaire of 69 Colebrooke Row, pops in for a drink later with a few friends.

Run by Camille and Hobby, the live-in landlords, the Charles Lamb has been a thriving business since its opening in 2005. They had always intended it to be a place where good food could be had at a reasonable price; a place where people would go after work when they didn’t feel like cooking at home; a place that was the sociable heart of a community. And it really is sociable – if our food writing lot hadn’t taken over its little alcove to the side, we’d be fighting for a place to sit.

While sipping a Kammerling’s cocktail and learning about the spirit from its creator Alex Kammerling, I soaked in the pub’s quaint décor. The walls were covered in framed maps of London, including a giant one of London as an island curated by Hobby who also has a hand in art dealing. That particular one is so detailed, it comes with a magnifying glass much to the delight of the guests. Towering over all this and the small wooden tables and chairs is a lone cockerel standing proud on top of a corner shelf.

Inside our charming environs, we start with a beetroot ravioli with lovage pesto and accompanied by the ‘Apollo’ pale ale from The Kernel. That lovage pesto, I later discover, also works wonderfully with warmed kipper. The main was a melt-in-the-mouth perfect pork belly with a sage and fennel salsa verde, Dauphinoise potatoes and salad leaves. This was accompanied by carafes of Redemption Brewery‘s Trinity. A beer interval was then had before the dessert, where we sampled Brodie’s East London Gold and Brodie’s Grand Cru, a timely break after a large but moreish main.

Mascha, the pub’s canine mascot, joins us for a dessert of London honey steamed pudding with blackberries. We all firmly abide by the sign that says “don’t feel Mascha” of course, who watches on as we sup on The Kernel’s Suku Quito Coffee, an India pale ale.

The tasty three courses that we savoured were all made with ingredients sourced from the likes of Plantation Pigs, Wenlock Herb Garden and Prudence, who lives a couple of houses down the road to the Charles Lamb. It seems that Camille and Prudence became close friends after the death of Prudence’s husband. When Camille searched for space to grow things for the kitchen, Prudence offered her untamed garden. These days Camille visits Prudence daily, to tend the herbs and vegetables grown just for the Charles Lamb, and Prudence happily enjoys the company. A rather heart warming tale to hear while the rest of London appears to be in a Hobbesian state of nature.

Draining the last of the brews, I gingerly walked to the tube station escorted by my new foodie buddy who I bonded with over a few London beers. All seems calm in Angel after all – perhaps there is hope for us Londoners?