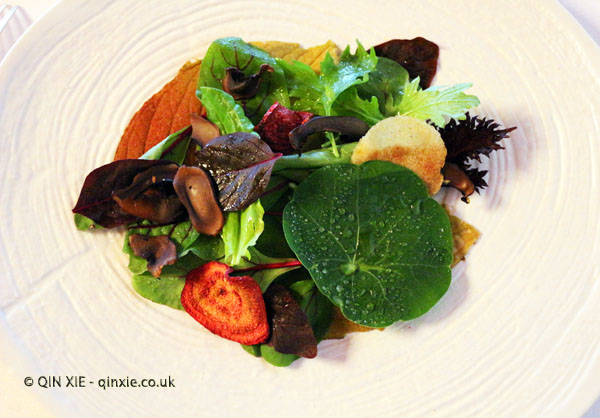 The leaves and the foie under the rain

Hake and its kokotxa with oyster leaf

Squid as a risotto, butter flower

The broke jar of yoghurt, ‘gatzatua’ and berries

When you meet someone for the first time, you have an impression of what they might be like. For chefs, this translates into the food. Pedro Subijana, with his huge moustache and portly stature, gave me the idea that his food might be a sort of stuffy, traditionalist take on a three-star menu. But the reality was so far from it.

I went with the Aranori, a menu of mostly new dishes at the restaurant as I was keen to see creativity – and it was exactly what I was shown from beginning to end.

I still remember the delicate flavours of the ‘rain’ in the first dish and how every vein was painted on a ‘leaf’ of foie – the attention to detail of which caused an exclamation to escape unexpectedly. The green broth infusion that came next highlighted the very essence of a seafood dish, without the overwhelming richness. Its clarity was like drinking a fine green tea. And then there was the squid as a risotte, blackened with its ink. It’s so precisely flavoured that you felt there was something missing – until you stir in the perfectly styled rose made of butter.

I paid 175€ for the menu, plus very reasonably priced and considered drinks and service. It’s not the cheapest three-star tasting menu in the area, nor the most expensive. But it was worth every cent.