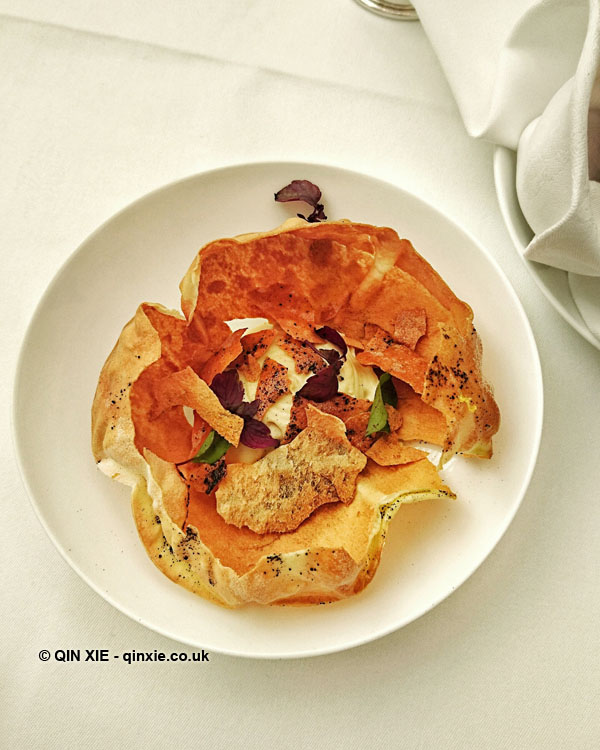 Menu from an a la carte lunch at Celeste Restaurant at The Lanesborough:

Pan-fried langoustines with wild grains and a langoustine basil broth

I had an à la carte lunch at Celeste Restaurant at The Lanesborough while conducting an interview recently. It’s in the same space as the restaurant that once occupied Apsley’s but with a completely transformed atmosphere and approach to food.

While the dining room had previously been quite dark, it’s now been painted a powder blue with bas-relief friezes decorating the ceilings. Two new wine rooms flank the entrance.

The food is under the watchful eye of Florian Favario, a protegé of Eric Frechon, chef patron of the three Michelin starred Épicure at Le Bristol in Paris, another hotel in the Oetker Collection. Naturally, Celeste is aiming for a star.

But the food is quite hard to pin-point.

It’s not quite classic-French. There are notes of Middle Eastern influences, as seen by the hummous and cracker bread that opened the meal. The langoustine, with the basil broth and wild grains, also reminds me of the Mediterranean. And then there’s the suckling pig, which somehow manages to be a little bit British.

This eclectic collection of influences isn’t necessarily a bad thing though – the flavours don’t fight each other. And the execution has been done very, very well.