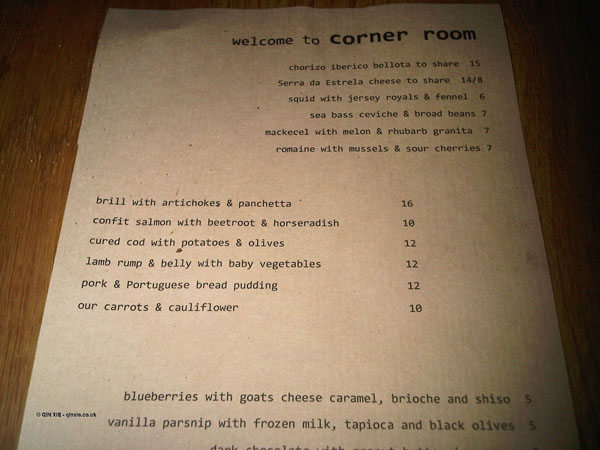 Nuno Mendes is not a dessert fan. But for my sweet tooth, it actually turned out to be less of a problem than you’d think.

My friend had a five day interval back in the UK, after four months of being away for work in Dubai, so we arranged to catch up over dinner. Our last meal was a fun (mostly down to the excellent company) but rather disappointing affair at 1 Lombard Street so dinner this time was required to be a step up. I got word via twitter that Nuno Mendes has a new East End venture, The Corner Room, which is not too dissimilar to Viajante. As Viajante has been on my radar for quite some time, although I have yet to try it out, Corner Room seemed like the perfect introduction.

Housed in the same building, but on the other side, as Viajante, it feels like the divide is more than just spatial.

The Corner Room doesn’t get its own fancy website but by way of the blogosphere I have learnt of its existence and its comparable affordability. And also that it doesn’t take reservations.

Around 7.45pm I rocked up to the venue hoping to get a table for 8pm, when I had planned to meet my friend. No such luck – the dining room was full and there was a small group gathered outside hoping to get on the waiting list for tables. “People will be leaving their tables around 8.15pm” we’re told, this seemed like an acceptable wait so I put my name down half expecting my friend to be late anyway. My friend turns up at 8pm on the dot and I am most surprised – people don’t turn up to things on time do they?

We waited in the dreary lobby of the Bethnal Green Town Hall Hotel as it was almost time for us to sit down for dinner. Or so we believed. The bland old-fashioned wooden panelling did little to inspire conversation so it’s good that we had plenty of ideas of our own. But 8.15pm turned into 8.30pm and then rolled into 9pm when we were eventually seated by a rudely distressing waitress who had been informed by a rather nice managerial character of our loitering presence outside.

Inside, the room harmonises somehow with the décor of the exterior but offers a seemingly brighter and more welcoming presence. The back wall is draped with hanging lights of various heights while the two steam punk style pieces hanging over the middle added even more gentle brightness to the light already yielded by the two full length windows on the side wall. At the front, a spiral staircase lead to nowhere next to the reception counter. It feels like a scene in an East End play, a vintage one.

The waiter assumed that we’d be having starter and main although both my friend and I had eyes for dessert. With a Cornish adventure planned for two days time, I decided to shun most of the fish heavy menu and opted instead for a rather safe lamb rump and belly with baby vegetables, as did my friend but for entirely different reasons.

The portions were small but like the baby vegetables, perfectly formed. The medium rare lamb rump was tender and moist, contrasting sharply with the more solid meat of the belly. A glass of Domaine Cosse Maisonneuve “Le Combal” 2007 made a sweetly rich accompaniment as did, surprisingly, the Touraine Sauvignon “Le Petiot” Domaine Ricard 2010. Indeed the wine list of 12, all available by the glass, is quite extensive given the concise 15 dishes on the menu. Compared with Viajante’s set menu, the choice is welcomed.

For dessert, my friend had the blueberries with goats cheese caramel, brioche and shiso while I was enticed by the vanilla parsnip with frozen milk, tapioca and black olives. Both desserts leaned towards the savoury which was interesting but disconcerting. The blueberry concoction didn’t work for either of us though – the flavours pulled in too many directions and ultimately failed to satisfy the sweet tooth that savoured it. The vanilla parsnip however, did work much better. There’s a sweet, almost caramel experience about the dessert but that’s slightly drawn back by the overpowering taste of the parsnip chunks. How much better and more perfect the dessert would be if honeyed roasted parsnip chips were used instead of the poached chunks.

Several hours after we embarked on this gastronomic experience, we left with wallets only slightly lighter and mildly satisfied. Another savoury course was definitely required to render us content. Meanwhile, the Viajante bar down the corridor provided room for much afterthought.