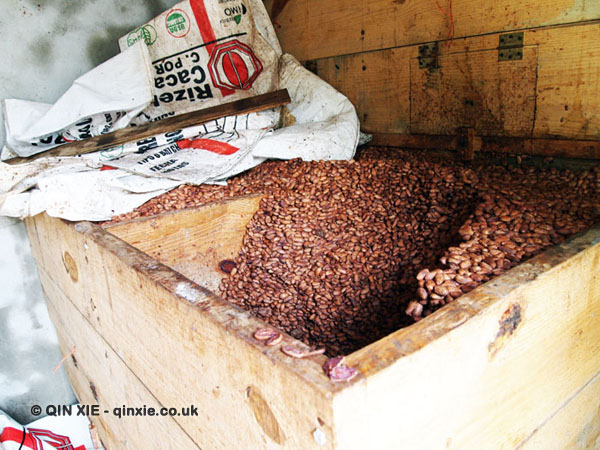 The air was humid and sticky, the mosquitoes were out in force and hungry, but the patter of rain softened the blow. A little.

I was standing in the middle of a rainforest plantation in the Dominican Republic. It produced beans for chocolate-maker Valrhona, and I was there to learn about organic cocoa production from some of the best in the business.

Having been a consumer, a chef and a judge at the international chocolate awards, I thought I knew a fair bit about chocolate – but I quickly realised there was quite a lot more to learn.

Take the cocoa beans, for example. It’s generally accepted that there are three kinds of cocoa beans used for making chocolate – criollo, trinitario and forastero.

Except in reality, like grapes, cocoa beans come in many different varieties. The plants are selected, cloned, cross bred and grafted to create the most efficient crop. One that’s resistant to disease, gives higher yields and, most importantly, will produce great tasting chocolates.

And just like wine, the flavour of chocolate is affected by every stage of the process – from the type of beans to their processing and production.

The Dominican Republic is the world’s largest supplier of organic cocoa and just one of the many countries that Valrhona sources beans from. On this Caribbean island, the company works exclusively with Risek, which produces fairtrade beans according to the requirements set out by Valrhona.

A cocoa plant’s life begins with damp beans germinating under the cover of a hessian bag here.

The shoots, selected according to the flavour of the beans, are grafted onto favourable root stocks once they are big enough; the same process is used in orchard fruits and grape vines.

The grafted plant will then grow in a nursery until it’s ready to enter the plantation.

From there, the process becomes even more involved.

Six to eight months before young cocoa plants are move to the plantation, other crops, including coconut and banana trees, are introduced to provide shade and sometimes to create nutrient balance in the soil. These are removed as the cocoa trees mature, but they offer a temporary source of income until then.

Young cocoa trees need a soil mix that consists of clay and sand so that the ground isn’t too dry during the dry season or become waterlogged in rain season. A mix of stem, manure and branches is applied as compost, and it’s reapplied throughout the tree’s life to encourage healthy growth.

As the trees mature, they need to be carefully pruned to allow the right amount of airflow and sunlight through the branches and limit the spread of disease and pests – crucial in an organic plantation.

And then it’s a three year wait for the first pods.

Fortunately the trees continue to be productive for some 20 years before needing to be replaced. And in the Dominican Republic, they can be harvest twice a year thanks to the rain and therefore growing seasons.

All the cocoa pods need to be carefully harvested by hand as new pods will grow in the same place as the old ones. If there’s damage to the tree during harvesting, nothing will grow there in the future.

Each pod needs to be opened and inspected for disease and quality before the beans are removed and put into wooden fermentation boxes. There, the beans will go through anaerobic followed by aerobic fermentation – the amount of time at each stage will affect the final flavour of the beans so it’s carefully monitored and controlled.

After fermentation, the beans are allowed to dry naturally. If they dry too quickly, they will form an acidic crust; but if they dry too slowly, they can begin to rot.

When the beans are eventually dried, they’re packaged and shipped to France, to Valrhona’s headquarters and factory in Tain-l’Hermitage, to be blended and made into chocolate. The finished products are then shipped all over the world for fine chocolates, desserts and other treats.

It’s a complicated process but is it all worth it?

The world’s top chefs, some of whom works exclusively with Valrhona, certainly seems to think so. Serious patissiers like Oberweis, who supplies Luxembourg’s royal court, even offers a single origin Dominican Republic 70% cocoa chocolate with its coffee.

Valrhona is still looking to improve on this and has acquired its first plantation in the Dominican Republic – Loma Sotavento. It is hoped that the plantation will allow Valrhona to work more closely with the Dominicans to research, develop and improve farming practices and production techniques that would ensure better chocolates for the future.

In the hellish jungle, that thought certainly helped the testy heat melt away.