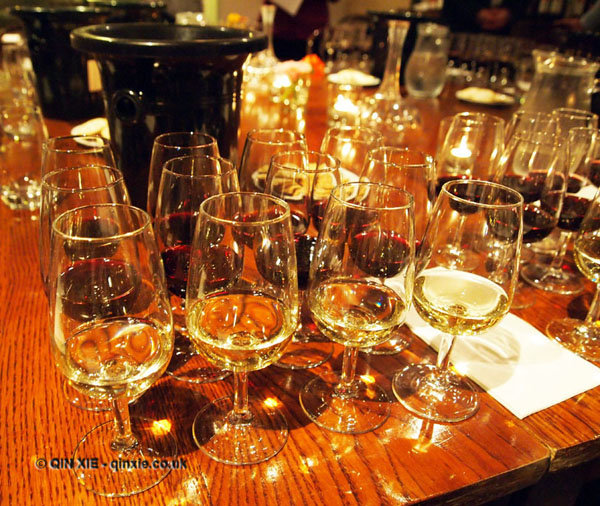 Tom Harrow’s reputation as WineChap precedes him. Lovers of fine wine will already have his number on speed dial, of course, but those following trends couldn’t have missed him being named one of the 1,000 most influential people in London by the Evening Standard last year. His trademark linen suit, a shade somewhere between terracotta and muddy red, jaunts between elite crowds. His ChapMobile frequently spotted at mysterious locations in Marylebone. His considered musings found at tables of the best dinners.

At the 11th hour, well, more like the 14th actually, I received an invitation to dine with Mr Chap. The invitation came from Mr Chap’s dashing friend, and arrived via flashing red beacon to my BBM. Injected with mystery and flirtation, it contained the promise of an evening sampling some special Argentinian offerings with two charming gents – how could a girl resist?

A fine mist descended from above and puddles formed underfoot as I dashed across London, to Casa Malevo in Marylebone, for 7pm whereupon I discovered I was unfashionably early. Mr Chap greeted me with Christian Rothhardt, the man behind the Argentinian wine specialist Ruta 40, who was introducing a selection from Bodega Tempus Alba that evening.

Swiftly, I was offered a shot of ruby – the Rosado de Malbec 2008. Few are the Malbec not transformed into a bold red but this floral number held its fruit rather well, injecting a hint of vibrancy to the evening.

As I considered my rosé, I surveyed the setting. The lower floor of Casa Malevo plays host to the sizeable private room, styled as an old Estancias dining room, as well as their selection of, largely Malbec, wines. Malbec is much celebrated as the Argentinian varietal after all. The intimate space seats 12 who, as Mr Chap talks of international wine markets, began to filter in. A glass of the rosé magically appeared in the hand of each as everyone familiarised themselves with the evening and each other.

A three course dinner followed where two wines were paired with each of the first two courses. The first, a very lively Malbec 2008, overwhelmed the palate with its rich plummy fruits, which seemed a bit unfair on the gently vanilla Tempranillo 2007 that followed. But then again, perhaps the Tempranillo couldn’t have afforded the intensity desired to open the starter.

For the largely Marylebone-based set, the evening seemed to be as much a social occasion as a forum to explore new varietals. Christian explained the selection we tasted from the producer’s point of view, including the age of the vines from which the grapes were harvested, while Mr Chap discussed terroirs and the style of wine with eloquence.

The first wine which accompanied the main required and warranted such explanation, and it was afforded with grace. The Vero Malbec 2007 was the first vintage to come out of Tempus Alba’s 10 year in-house cloning programme, with a very limited production of 5,000 bottles. The idea was to produce a wine which was made from a very pure Malbec vine so that, as more producers adopt the varietal, any expressions of the final wine would be a true reflection of the terroir rather than differentiating varietals. It’s an interesting concept and the wine was similarly so, although it would have enjoyed being set down for a while longer before being cherished.

The wine which followed, and the final of the evening, was the Pleno 2006. A blend of Malbec and Cabernet Sauvignon, it offered a good bouquet of cherry and was much more accessible than the Vero Malbec 2007.

In the interlude between coffee and desserts, guests had the opportunity to pick up wine tips if that was their intention and curiosity. The alternative seemed to be talk of golf and property – I know which I’d rather spend my money on.

There’s a good splash of wine loitering around at the end of the night for those who want to stay on for conversation or, with the help of Casa Malevo’s very potent double espresso, you can do as I did and entice the dashing gent to join me for a sharpish cocktail or two.