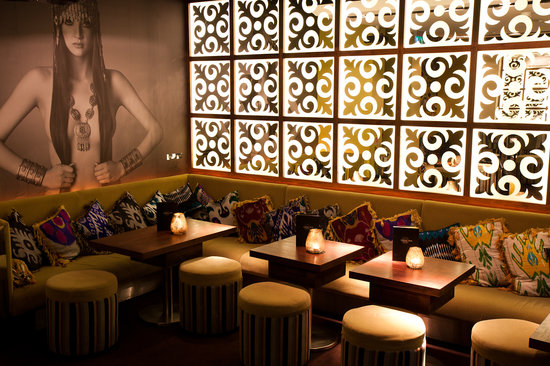 The Russian Standard bar at SamarQand, Marylebone, opened recently on the 1st anniversary of the restaurant to a flurry of crystal Louboutins, oligarchs and some 90 litres of vodka. But what’s it like the rest of the time?

The giant horse which divides the restaurant from the bar and the riding art work on its walls all links back to Tajikistan as a riding country. The careful silver patterns illuminated by bright, but somehow not garish, backlights are created in the traditional Central Asian style. Even the private rooms of the bar, with their hand painted wall paper, are all named after capitals of the countries in the former USSR.

The air conditioned bar area, a slightly segregated room with banquettes and a series of private rooms, makes cocktails and conversation easy. One can imagine though, after a few shots of Russian Standard, it would also make quite a room for dancing.

During the week there’s more diners than bar hoppers. Those that do lounge in the comfy bar area all seem to take their place two by two – it must provide something interesting to talk about on first dates. At the weekend the venue gets a lot more lively with young professionals and very well-heeled students taking their place at the bar. Given its Russian theme and Marylebone location, a few oligarchs here and there wouldn’t go amiss either. And while the evenings can only get livelier with vodka at the top of the drinks list, the burly bouncer who politely opens your door will make sure that nothing gets too wild.

The name of the bar gives away its top drink – Russian Standard vodka, by the shot glass or by the bottle. But it’s not exclusively Russian Standard as there are other vodkas on the menu too. The next best thing seem to be the cocktails at £9 for the standard Russian/Central Asian inspired numbers or £15 for the “Oligarchs”. Every cocktail on the menu is inspired by something Russian or Central Asian, even if you have to be in the know to guess the link. You may be surprised too, to find a large selection of wines, including Georgian wines – a rare find in the UK but very popular in Russia before the ban. If you need to quench your thirst with something non-alcoholic then Voss water comes highly recommended.

Don’t worry about drinking on an empty stomach either – the bar and the restaurant share the same menu so you can definitely eat to your heart’s content. The food has been adapted for the European palate but with custom made ovens, imported spices and recipes passed down through generations, there’s definitely authenticity in their selection of manty, shashlik and plov. The smaller dishes are around £8 and bigger ones are around £15, all designed to be portions for sharing. It’s not cheap but you wouldn’t expect anything less in Marylebone.

The Russian Standard Bar stays true to its roots and most of the music is Russian or Central Asian during the week. Whether foreign or familiar to the ears, though, the music is mellow enough to be non-intrusive. At the weekend, like the crowd, the music picks up pace and becomes a heady mix of Eastern European and mainstream dance tunes. The aural experience is certainly a unique one.

Those with Russian or Central Asian heritage will definitely find something homely about this eclectic mix of cultures. Those that aren’t can certainly seek out something new and interesting, if they’re not afraid to dive right in and get involved. Be careful though, with vodka on the table and Russian melody in the background, you might find yourself partying like you’re in Eastern Europe. Wild.