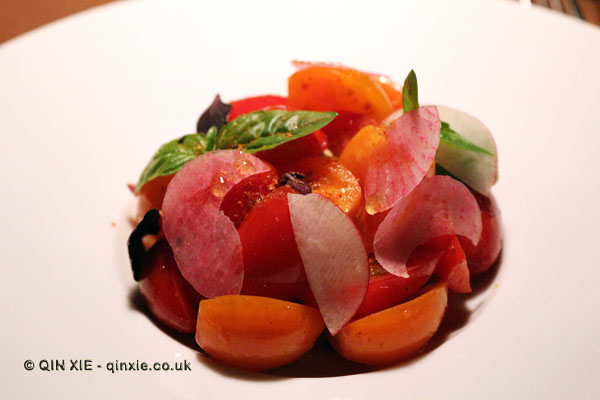 Menu from an “early supper” (6pm-7pm) dinner at Table No 1 by Jason Atherton in Shanghai, China:

Considering the quality of Atherton’s food in London, his Shanghai outpost Table No 1 really couldn’t compete.

It’s well made and well executed but somehow doesn’t quite have the same finesse, or the richness of flavours.

For example, the tomato salad, although well-presented, didn’t have the intensity of one made with sun-ripened tomatoes. There was a certain blandness to it, which in turn made it rather boring to eat. Even with the addition of the basil, it craved something else as well.

There were some good things about the menu though. The egg broke open and melted its golden lava into the broth, adding to the richness. The dessert, though resembling three nipples placed on a plate, was perfectly balanced in terms of the sweetness and sourness.

And given the lower prices for an early dinner, the equivalent of a theatre menu, it’s still very good value for money.