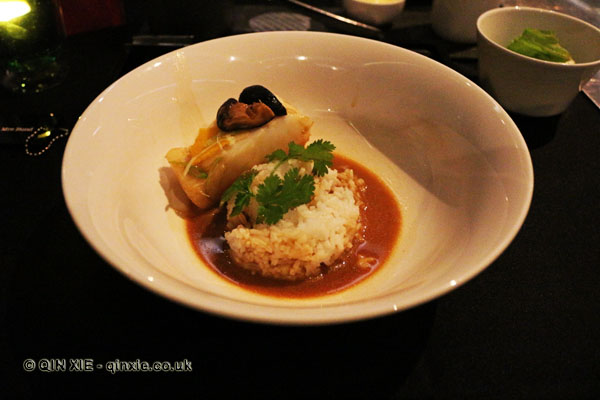 Menu from a late night dinner (from 11pm) at the French Modern Eatery by Paul Pairet, Mr & Mrs Bund, on The Bund in Shanghai, China:

[Appetiser of whipped salmon mousse, topped with pepper and served with crostini]

Black cod in the bag

I stayed up pretty late to go for the late dinner at Mr & Mrs Bund, which was slightly cheaper than the full a la carte. The entire building seems to be open for clubbing and the restaurant is no exception. The interior is dimmed and house music is pumping.

The menu is quite sizeable but a few items were listed as Paul Pairet’s signature dishes. Although these were also in the late menu, they had a supplement.

I ended up ordering just two things – the cod in the bag and the lemon and lemon tart, both signatures.

Of course, it’s the lemon tart that everyone talks about. It takes some 72 hours to hollow out and preserve the peel of the lemon before it’s filled again with a lemon filling. The pastry is just the long stick of baked short bread.

You know, the thing that I like about restaurants is the conversations that happen at the dinner table. At Mr & Mrs Bund, you might have to shout over the noise.