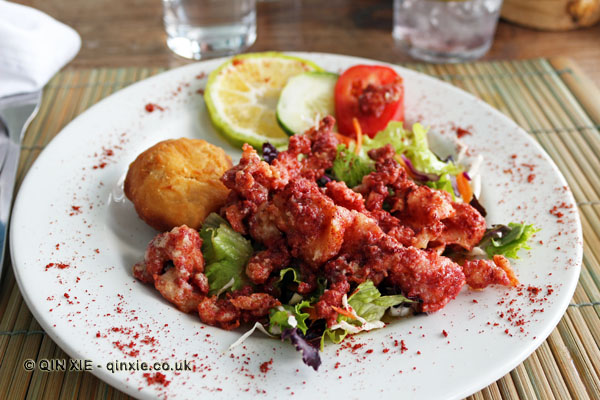 (This is the second part of the Island eating in Grenada post. The first was on the island’s raw ingredients.)

Being in Grenada for the Grenada Chocolate Festival meant that there were a lot of chocolate related meals but I also had an opportunity to explore some of the local fare.

Most of the places I went to were pretty casual so I’ll start with the one fine dining restaurant – Rhodes at Calabash Hotel. It’s open for dinner only, although with its beautiful, green-canopied veranda, it should really be open for lunch too.

Under the guidance of celebrity chef Gary Rhodes, the Rhodes Restaurant is suitably European with the occasional Caribbean flavours peaking through. Actually, I was surprised about how good it was because attempting European-style food outside of Europe rarely works. But this did. The chocolate banana pudding with salted caramel ice cream and chocolate sauce was, for a lack of better clichés, to die for.

Swinging to the other side is the ultra-casual BB’s Crabback, which of course everyone reads as crabshack the first time round. It’s a fun little lunch spot in St George with views out over the bay. Just about everything on the menu is named after one member or another of chef/patron Brian Benjamin’s family but it’s hard to pick favourites.

The crabback is basically crab meat baked in its shell with herbs and sauces but the restaurant also serves up other typically Grenadian dishes such as lambie (conch) and callaloo (a local plant with spinach-like flavour). I had a wonderful lunch there but it’s definitely not the cheapest place to go to for lunch.

The one that really impressed me was Patrick’s Home Style Restaurant. It’s a casual, home-cooking type of place with sharing portions and bad lighting, which means it’s bad for photographs but good for just tucking into the food.

Ms Karen is the chef now but the restaurant was opened by her father Patrick. There’s strictly speaking no menu. Instead, you get between 15 to 20 dishes, served “tapas style”, to share between the table. Normally this really gets my goat (yeah I said it, sharing is not my thing. And the pun too.) but the portions are so generous that no one will miss out.

I think I liked this place so much because it did feel like eating at home, but with Caribbean food obviously. We had, amongst other things, a rich and earthy callaloo soup, a garlicky green banana salad, fish cakes, crab salad, chicken salad, creole fish etc. It was a big menu, showing off the diversity of Grenada’s ingredients and the flavours that can be created within Caribbean cuisine.

I stayed at two very different hotels during my time in Grenada, True Blue Bay and Blue Horizons, and had my share of meals there. There were self-catering facilities on site for both but it’s a little impractical without a car.

Blue Horizons had a casual westernised bar and a slightly more formal creole restaurant called La Belle Creole. It’s simple food and some of it inspired by the owner, Arnold Hopkin’s mother. True Blue Bay was much more international in its offering at Dodgy Dock with anything from Mexican (the owner Magdalena Fielden is the Honorary Consul of Mexico for Grenada) to pizza.

On one of the nights, I went to the Sandals La Source Resort to try their Japanese teppanyaki offering, Kimonos. The chefs were clearly well-trained to entertain and the food was delightful but it just wasn’t Caribbean. That said, sushi is apparently very popular in Grenada because of the fresh fish.

I also popped into Coconut Beach, a French creole restaurant on Grand Anse Beach. I heard it’s more of a lunch spot because of the view but, as I had already eaten, I thought I’d just have something light and see what it’s like. Although the service was very attentive, the food sadly didn’t compare well to the highlights from the rest of the week.

Last thoughts on food in Grenada

My week in Grenada has been a diverse mix of local and international food, some of which has been surprising and others surprisingly good. I think the best way of describing it is that it’s wholesome comfort food. It’s not diet food but it’s delicious stuff. And if you wanted to stay in shape, the island has plenty of ways to keep you fit like the weekly hash.

I can’t say that I’ve uncovered Grenada’s true culinary identity but it’s certainly given me a lot of flavours to think about.

In Pursuit of Food was a guest of Grenada Tourism Association. If you want to know what this means, check out our Editorial Policy.