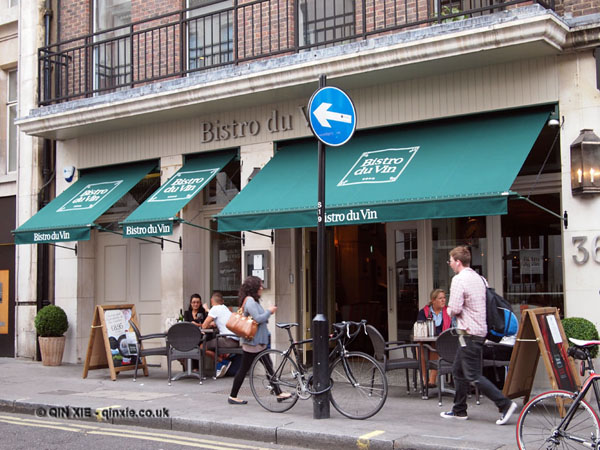 “Oh my god, why is everything so big?!” came the exclamation after the final course of our meal at Bistro du Vin, Soho, arrived.

Indeed, that has been the case throughout this slightly impromptu dinner curtsey of the Bistro arm of the du Vin group. The Bistros, originally a bit of a side order to the Hotel du Vin franchise, have now grown into a mini-chain of its own. The first Bistro venue arrived in Clerkenwell earlier this year and has been followed swiftly behind by its Soho sister, the location of our dinner.

For those who don’t know, Hotel du Vin was founded in 1994, thanks to sponsorship from various wine estates. Each of the rooms in the first hotel in Winchester was named after the sponsor of the room and furnished with their wares. Since then, the group has acquired more small boutique hotels, each with rooms named after different sponsors, but all with varying quirky characteristics.

Like all the du Vin venues, the focus is on wine but everything else is down to location. The Soho Bistro du Vin has a Dean Street Spritz on the menu as an ode to its location but it also has a rather fancy cheese and charcuterie “cellar”, more of which later. But first, let’s start at the beginning.

I read somewhere that Bistro du Vin, Soho, has that impeccable service where you’re led from the door to the table in one smooth handover motion that you barely notice. That has certainly been the case here. My dinner date was a tad late and I was dreadfully early, giving rise to quite a wait for me. Luckily the staff were on hand to offer me water and a Chase Summer Punch for company. The wait also allowed me time to look around. 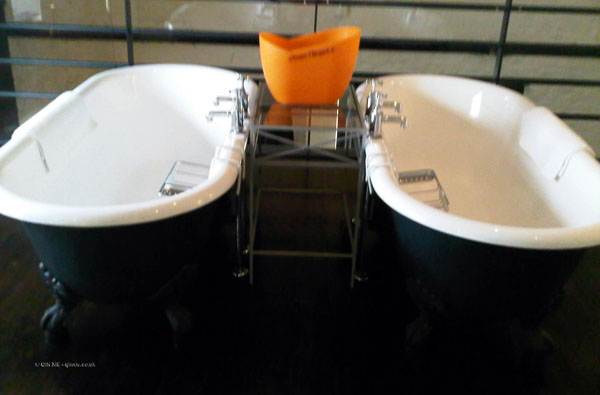 My last visit to a du Vin venue was the Hotel du Vin in Bristol where I stayed in the Veuve Clicquot suite. For a lone traveller, the double baths were a little redundant and the monsoon shower much more inviting, especially after a long day’s work. But aside from the luxury, there was also plenty of quirks to admire, from the alcove lounge to the support beams in the middle of the room.

Compared to the Bistro that was part of the hotel, this one had a much more contemporary feel some how. Maybe it’s because I’m sitting close to the brightly lit pass where food from the kitchen is distributed at a steady pace. Or perhaps it’s some of the not-so-vintage bottles dotted around for “decorative purposes”. I think it’s probably the leather upholstering on the banquettes though. The lighting is also somehow familiar – the one with the antlers, I am reliably told, is sourced by Katrine Bradley.

My dinner date finally arrives and we embark on a very large three course dinner, complemented by a bottle of Descendientes de Jose Palacios “Petalos del Bierzo” thoughtfully chosen by the sommelier.

I’m not quite sure what to make of my Cornish crab starter, and there was a lot of it. I am always on the look out for whole crabs and though this one didn’t come in crab form, it did certainly arrive with some shells. But perhaps I am just picky having recently returned from a Cornish odyssey, complete with picked crabs at the Ferry Boat Inn, Falmouth. The other starter was the tart du jour, a leek and pancetta number on this occasion with a chutney and salad. Whether it was a case of the grass being greener or not, I lusted after the other starter.

Steaks dominated the main with one fillet, with peppercorn sauce, and one rump, with Béarnaise sauce. The man-sized portions were cooked in the best way – chargrilled, medium rare. The sauces came in their own little sauce pan, which, as anyone who has ever tried to manoeuvre paper dispensers will agree, is a welcome improvement.

The finishing touches were the chocolate tart and the crème brûlée, which was what rendered the remark about the massive portions. That’s probably not the most exciting part though. Also on the dessert menu was the option to have unlimited cheese from La Cave à Fromage for £12.50. Given the size of the cheese cellar, there was quite a large selection of UK and international cheeses to choose from – heaven for any cheese fiend. In fact you’re even invited into the room to help plunder the stock, as it were.

After the exceptionally large meal we decided to retire to “Le Salon”, the lounge area of Bistro du Vin, Soho, for some much needed coffee before waddling home. As my dinner date puts it, “my stomach is like that of an African child, distended and expanded”.