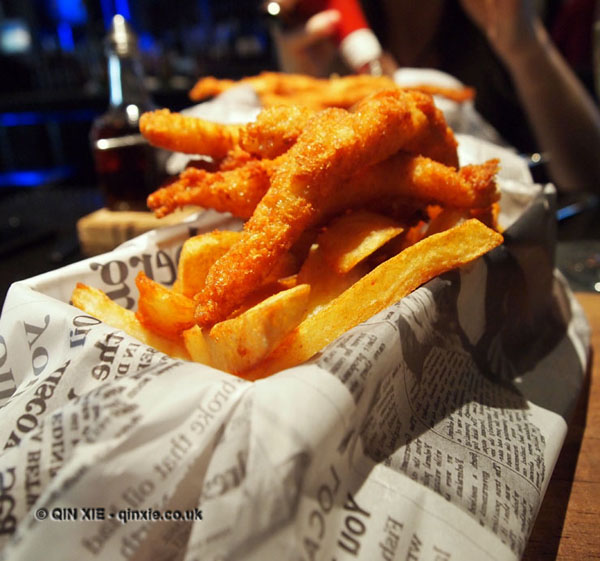 Fish and chips, so simple, British and… Actually surprisingly complex when it comes to drink pairings. Think about it, what do you have to drink when you go to your local chippy? Larger? Stout? Coke? Tea?

Actually I don’t know the answer to that question but the offer of a gastro-oeno experiment from Tom Harrow of Winechap enticed me. The posher than average chip shop Kerbisher & Malt was the location and the crowd was wine types, tea types and me, falling somewhere in between, arguably not particularly excelling at either except in quantities consumed.

Kerbisher & Malt, named after an old fishing boat and of course malt vinegar, opened in May 2011 by owners Saul Reuben and Nick Crossley. From the off, they promised “no to preservatives, no to food from a packet, no to dirty oil, no to neon lights and no to soggy chips”. And now they’re getting serious about their drinks menu, too.

Working through the Kerbisher menu, we had a selection that went from Chardonnay up to Champagne, and Oolong down to breakfast tea supplied by the Rare Tea Company (just for the purpose of the experiment). It was really a Marmite collection of matches that served well to divide the opinion of the table.

Starting with whitebait and calamari for light bites and the Cuvée des Croix Blanches Muscadet 2010 for refreshment, the discussion was already bubbling. For me, the muscadet worked with the whitebait but the light spice of the calamari fought its corner against the wine and won.

The De Telmont Grande Reserve Champagne that came next worked in harmony with the chips and copious amounts of ketchup but, it seems, possibly little else. Perhaps that was always a drink meant for supping on its own or with grander comestibles.

Next up was the La Gitana Manzanilla which, though refreshing alone, for me, was a terrible match for everything. While I blamed a particularly bad sherry cocktail for that conclusion, the rest of the table welcomed its acidity.

Haddock arrived at the table along with pours of Pilsner and Riverlands Sauvignon Blanc 2001, both proved to be poorly matched to the fish but worked well with the sides – the Pilsner overpowered while the sauvignon blanc was overpowered. Clearly this was a match with more than a few struggles.

More chips arrived and the riesling came in the form of Dr Loosen 2010 which I particularly enjoyed. It was a serious contender for matching with everything, especially the ketchup. But on second evaluation, not so good with vinegar soaked chips.

Wheat beer was the last alcoholic drink and was a relatively neutral finish – it didn’t add anything or take anything away and if you liked beer well then it must be a no-brainer.

Then came the soft drinks. The bitterness of the Fentiman’s Traditional Lemonade was much improved by the vinegar soaked chips which brought out more of its floral qualities, while its pink counter part faired a little better on its own. The Coca Cola did little to impress either way. But the winner must surely have been the Oolong which, on the first brewing at least, did well to work harmoniously with everything. On the second brewing, though, the tea became too bitter for the chips and needed a douse of milk.

At the end of the evening the table was divided on the favourites. It came down to wheat beer or manzanilla, which the beer narrowly won. The Oolong followed closely behind and came up crème in the soft drinks.

What surprised me, and perhaps everyone else, was the fact that ketchup smothered food seemed to work with everything. Is ketchup the wunderkind that will facilitate all wine matches? Guy Goodward, editor of Decanter, poses that we need to further test the drink matching capabilities of fish and chips with fine vintages. I’m inclined to agree. But then I am always hungry for a good feed, especially if well watered too.