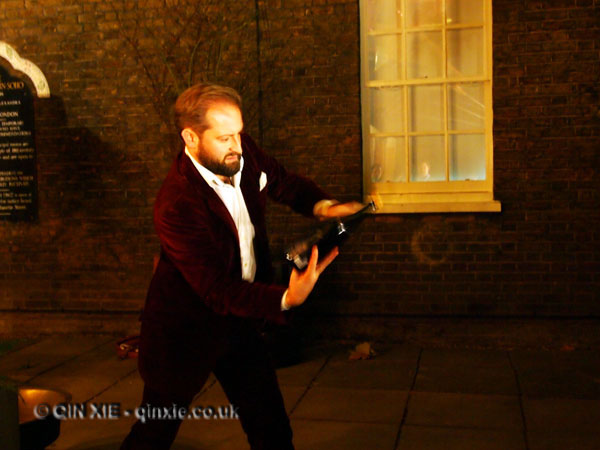 This is part one of two on Charles Heidsieck and the art of sabrage. Read part two here.

In layman’s (or woman) terms, it’s playing with swords whilst under the influence of alcohol, only the amount of alcohol available for consumption is drastically reduced if the sabrage goes awry. Nothing like the promise of danger to get the party started it seems.

But there’s definitely nothing better than a round of sabrage before getting to know Charles Heidsieck.

According to legends, Charles Heidsieck was the original Champagne Charlie who inspired George Leybourne’s song (Langham Hotels worldwide toasts Champagne Charlie daily at 19.05). It was he who broke away from the Heidsieck & co family name and put his own stamp, or rather, his own name, on the Champagnes. And it was he who was credited with introducing America to Champagne.

Not quite the inventor of sabrage but quite the maverick nevertheless. So you see why sabrage is the perfect introduction to proceedings.

The introduction was made by Tom Harrow of WineChap who had hosted various sabrage events.

Apparently bottle shape, temperature, vintage and the style of wine will all affect the success of sabrage. The key is finding a sturdy bottle (for safety reasons) that’s well chilled (reducing spillage) and encloses sparkling wine with pressure of around seven bars. In this case, a bottle of Charles Heidsieck (or a practice bottle of Cava for the less experienced).

The fault line is where you need to take aim, but don’t fire just quite yet.

Remove the wire cage around the cork and aim away from people and other things you don’t want to damage in the unlikely event that you have a bottle that’s holding back a lot more than the seven bars.

Take your sabrage weapon (be it a sword, spoon or even ipad) and tease it along the neck, flat against the shape of the bottle, and across the fault line. When you’re comfortable, follow through with your tease, but don’t lift your weapon at the last minute. The cork and annulus should slip cleanly off with ease. That is, the rim of the bottle is the only part that’s taken off with the cork – you’re not hacking off the neck here!

Anyway, after you pop your cork, it’s time to enjoy some Champagne. Do use a decanter or some other intermediary device if you think your sabrage skills might not have had the desired effects on the content of your bottle.

Charles Heidsieck hosted a tasting and dinner. In Pursuit of Food was a guest at the event. You can find out more in our Editorial Policy.