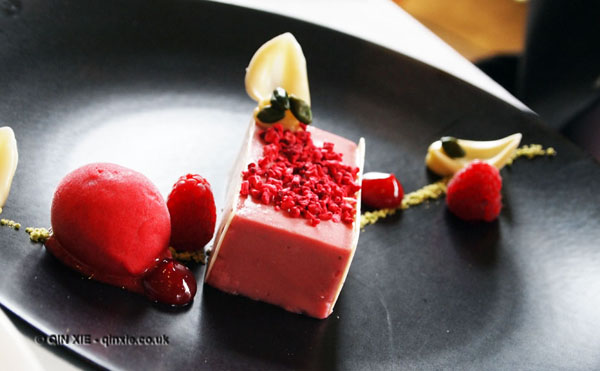 A short train and taxi ride takes you, within the hour, to the charmingly secluded Buckinghamshire country club Stoke Park. Part luxury country hotel and spa and part golf club, the exclusive property is probably more well known than you realise. As well as being the set for numerous blockbuster films such as James Bond and Bridget Jones’ Diary, it’s also the host of the annual Boodles tennis tournament. With London bursting at the seams under the weight of Olympics visitors, it’s the perfect time to visit.

The Country Club opened its doors to non-members for the first time and the award winning food alone is worthy of a visit.

Humphry’s, headed up by Executive Chef Chris Wheeler, is Stoke Park’s main restaurant and the holder of two AA Rosettes. For somewhere which only catered to members and their guests in the past, you might think that the food is stuck somewhere in history. Not quite so. Though there is a hint of the classics running through the menu (consommé and tian both make an appearance for example, as does a burgeoning cheese trolley), beautifully arranged modern British fare is served up.

The pan-fried scallops with celeriac purée and crispy pancetta was the ideal starter for me. The well prepared scallops, topped with a little caviar and adorned with jewels of port reduction, struck a balance between sweet and savoury when paired with the celeriac and pancetta. It’s a perfectly executed dish which was light but bold enough in flavour to titillate the taste buds for what’s to come next.

Unusually for me, I opted for a fishy main. It was partly inspired by the surprisingly fish heavy menu and partly because I was intrigued by the accompaniments. Indeed, for me, the violet potatoes which accompanied my oven-baked red mullet is rarely seen on restaurant menus. The main also offered char-grilled peppers, crab ravioli and lobster foam to vie for attention.

What really impressed me though, had to be the desserts. I know I’m a dessert fanatic but the stunning presentation really showed off a seriously skilled pastry section, no doubt down to the hundreds of weddings and events catered for at Stoke Park each year.

The Humphry’s Snickers is the signature dessert to go for and Taste of Apple sounds the most intriguing but I really found my fancy with the raspberry mousse and white chocolate ganache. The raspberry dessert appeared in mousse, sorbet, gel, crumble and fruit form in a delicate line on a black plate. Light, refreshingly fruity and striking in presentation, there’s really nothing not to like.

A tea or coffee is definitely recommended after dessert, if only so you can spend a little while longer staring dreamily out of the window. The view, by the way, is watercolour picturesque. With great food, wonderful views and perfect tranquillity, why would you ever leave?