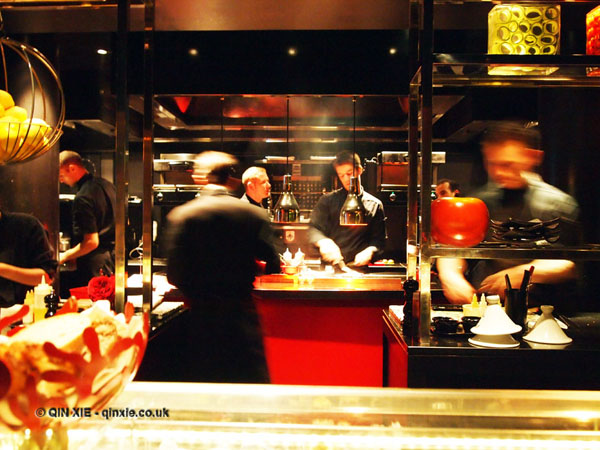 L’Atelier de Joel Robuchon is a two Michelin-starred French restaurant offering a Japanese style counter service.  The man behind the brand is the French-born and internationally acclaimed Joel Robuchon, once named “Chef of the Century” by Gault Millau and chair on the committee which produced Larousse Gastronomique. At the steering wheel is head chef Olivier Limousin, who has led a skilled and international team since the restaurant opened in 2006.

The food? All fabulously French; but that fresh, light and boasting-of-health kind that Robuchon is so well-known for. And plentiful in inventiveness.  At the kitchen facing front-line of the counter, it feels like the menu is an endless list of options, each one equally meticulously prepared. Even as we made our way through seven savoury courses, many more perfect alternatives were created for other guests. Then there’s the sweets – but more on that later.

First, an aperitif of parmesan cappuccino with port opened up the palate – a shot of flavour that really didn’t need its spoon for delivery. Taste buds shaken up, it was time for the next few courses.  We started on two seafood courses – crab meat with tomato jelly and scallop carpaccio with sea urchins and lemony olive oil; both delicate in colour and bold in flavour. My preference for white wine materialised in an inspired matching of Spanish Albariño and Luxembourgeoise Rivaner.  More classic white wine matches followed: a mineral-laden Austrian Grüner Veltliner to green asparagus cappuccino; a well-perfumed Alsatian Gewürztraminer to seared duck foie gras with Muscat grapes; and a balanced creamy Mâcon to a soft-boiled egg with Iberico ham and parsley oil.  If the courses and wines seem like they are arriving hard and fast, it’s because they were. But each course is delicate and each wine light, leaving plenty of room for conversation. Besides, attentive service from the other side of the counter offers the option of savouring pauses; if needed.  The final savoury course was a luxurious foie gras stuffed quail with truffled mash and the first red wine of the evening, an Austria St Laurent – a combination I would happily enjoy every day.

The surprise of the evening was actually the pre-dessert – a small crumble. Not only because it marked the end of seven marvellous courses that went by all too fast but also because it’s markedly different from the sorbets and mousses so often presented for this interlude.  The arrival of the pre-dessert also introduced two intricate antidotes to my sweet tooth.  The first is a variation of La Sphere, a fruit and cream filled spherical structure, and the second, Le Minty, was a juxtaposition of mint chocolate, mint sorbet and milk foam. “Straw wine” from South Africa and a ’99 port tamed and embraced the sugar, fruit, mint and chocolaty tannins. Simply divine.

There it is, all ten courses of the l’Atelier de Joel Robuchon experience; perfection which began and ended with port. How difficult it is to pick a favourite from all these impossibly intricate combinations. Behind all the courses, though, is a solid back bone – one supported by skill, well-travelled exploration of ingredients and fresh-faced classical French cuisine.