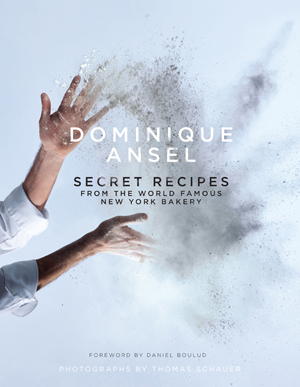 Last year I had this great spate of productivity – I promised myself that I would read at least one book a month and often managed two. I was trying to get through the classics, the Nobel prize winners and the smart books that every intelligent thinking person should be able to casually boast about.

To be quite honest, it got pretty boring. Some of the books were so tedious, that I had to splice trashy novels, sometimes several, in between them just to get through. On occasions, I did the sane thing and just gave up.

Then things got busy and I soon dropped the charade.

But at the end of last year, when I moved into my new home and had months without internet, I started to read again. Looking through the books I had on my tablet, I saw Dominique Ansel’s book, Dominique Ansel: Secret Recipes from the World Famous New York Bakery.

I had, evidently, downloaded it at some point and then proceeded to forget about it.

Now, I’m not much of a cookbook reader – I like to flip through one now and then (Phaidon’s Coco is my favourite), look at the stunning photographs and try to inspire myself to cook something fancy. I almost never follow a recipe but I might steal an idea here and there to liven up my repertoire, usually because I’ve become so bored of eating the food I’m cooking on a day-to-day basis.

Having just finished another novel, Ansel’s book, a representative of a different genre, looked pretty good.

Unlike your average cookbook, which starts with a couple of pages of introduction before launching into a hundred or so recipes, Ansel’s book has chapters and chapters of text before running onto a handful of recipes (I didn’t count them but there aren’t that many).

But what I liked about it is that it wasn’t just some authoritative drivel about how you should prep your baking tray or why organic stone-milled heritage flour is the only kind you should be using. Instead, it explained the best way to do things through a series of stories.

These were stories about failing to make the perfect macaron, emigrating to the US and discovering the cookie and creating the iconic cronut. Yes, a version of the cronut recipe is in the book.

It was a realistic, and well-written, account of life as a pastry chef. And even though I generally shun fads, I suddenly found myself wishing I had a cronut at 3am. In any case, I gained a whole lot of respect for Ansel through the writing in his book.

As for whether I’ll be making the cronut at home, the answer is in all likelihood no. Having made croissants at Leiths, I don’t need to look through the cronut recipe to recognise how time-consuming and technically challenging it is. I would much rather travel to New York to have the real deal, made by professionals who really care about and know what they’re doing.

Still, it was a nice interlude between light and heavy reading.