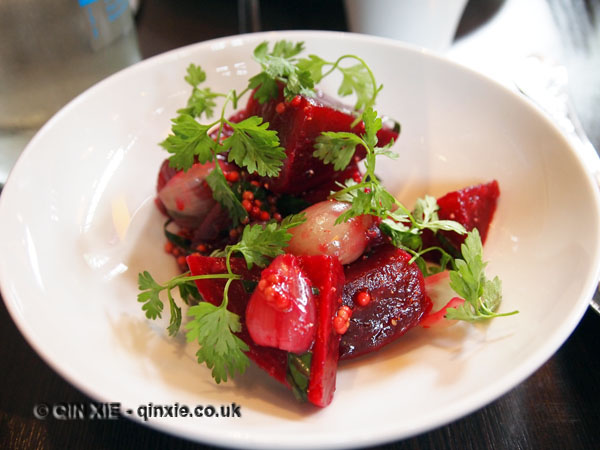 Menu from a the set lunch at Volta in Ghent, Belgium, (whose head chef is Olly Ceulenaere, a member of the Flemish Foodies) which is set out as four snacks followed by a main course (Read my food picks from Ghent here):

Volta has a very reasonably priced lunch menu and judging by the number of people stopping in the sizeable restaurant, it was very popular.

Although the a la carte items on the menu were more upscale and refined, the set lunch is a bit more rustic. But that is not to say the food was bad. Quite the opposite in fact – the focus was more on the ingredients than the execution so the well-sourced parts were just sort of ‘thrown together’.

That said, there were also items on the menu that were a bit more put together, especially in the case of the dessert.

It’s worth stopping by but you might be confused about whether you’re dining somewhere casual or about to embark on a fine-dining experience.