Home>Reviews>Menus>Château Angélus lunch at Hélène Darroze at the Connaught, Mayfair 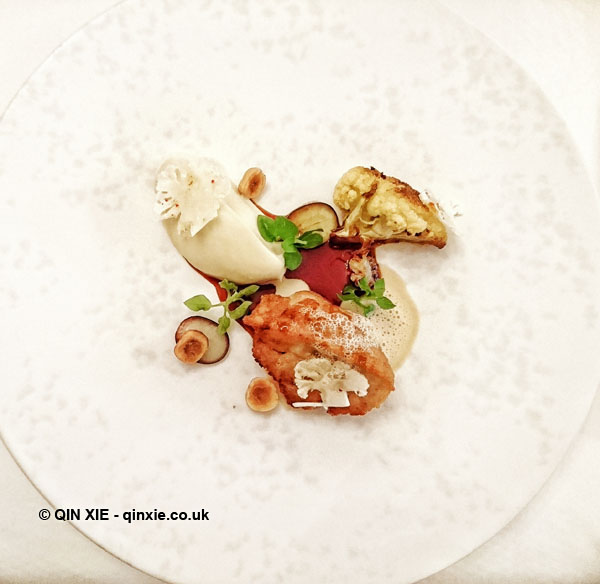 Menu from a lunch at Hélène Darroze at the Connaught in Mayfair with food from the two Michelin starred restaurant and wines from Château Angélus to match:

It’s the first time I’ve been to Hélène Darroze at the Connaught and it was a very impressive lunch.

The servings were small but well put together.

A starter of sweetbreads with cauliflower, hazelnut and muscat grapes was matched with the 2012 Carillon d’Angelus. The wine is on the young side for drinking to be honest but there was charm and the match worked, just.

I really loved the pork cutlets with pig’s cheek, Medjool dates and pumpkin. It’s spiced with ras el hanout. Oh my gosh, the smell was amazing – so savoury. The sweet and almost buttery dates made the pairing with the Château Angelus 2008 spot on.

The chocolate dessert was in two parts, both the texture of ganache. The chocolate is from Valrhona I’m guessing – it’s down on the menu as Tainori from the Dominican Republic, which was the Valrhona estate I visited a while ago. I only had the bar then so it’s interesting to see it turned into a dessert.

It’s slightly fruity, which helped with the match with the Château Angelus 2006. Incidentally the 2006 is still very young and fresh so it had some of that raw flavour that worked with the dessert. In a few years though, I imagine it would be more of a savoury wine.