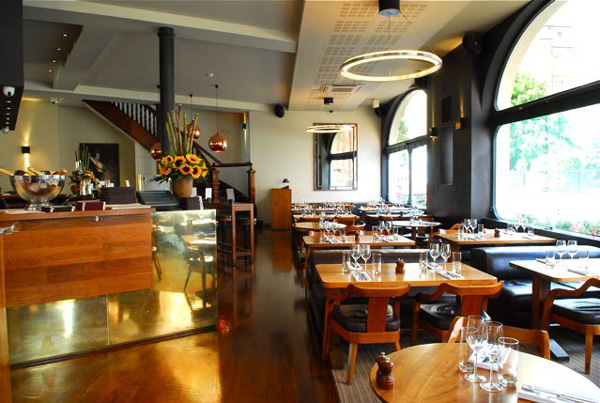 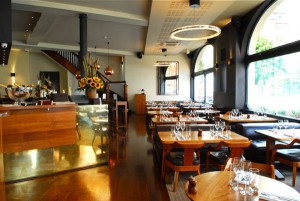 Whispers exchanged between passing Porsches have it that The Ebury counts a Royal-to-be as one of its regulars. The truth is, the well-heeled crowd that lounge in this Chelsea brasserie probably wouldn’t bat an eye if Kate and Wills strolled in arm-in-arm.

It’s not that it’s ridiculously posh. Well, I suppose it is a bit when you count the number of pearls adorning the necks of cashmered ladies; that is, if you haven’t been blinded by the light reflecting off their diamond knuckle-dusters first. But rather, there’s an overwhelming sense of privacy when you walk in, from the low lighting to the window blinds. You feel sort of safe and just blend in among the crowd, especially if you’re a Sloane. Besides, everyone seemed to be preoccupied with their own business which, for a privacy conscious individual like myself, is just fine.

I arrived first and scoped out a seat in the corner by the window – perfect for people watching or to plot domination of the London food scene in private. At 7.30pm, there’s a real buzz in the air and the place was filling up. For some obscure reason, Jonesy seems to think that it’s an obscenely early time of the day to be having supper, which, while I muse over the menu, I imagine was the reason why he’s keeping me waiting.

I began a slow tap on the table with my left hand, starting at my pinkie and working towards my index finger and then back again. Looking over the menu, I cast a furtive glance around the room for the first time. Considering the furore upstairs that was the joint 21st birthday of Tim and Ed, or some such young guns (who were all dressed in tuxedos, you understand, and smoking cigars, outside of course), downstairs was a mellow sea of families, young professionals and post-nesters. An eclectic mix I’m sure you will agree.

On my ocular exploration I happened to look out of the window. There was Jonesy. He has spotted me too, somehow, through the blinds and waved. I felt slightly duped by the false sense of privacy that the blinds offered – don’t sit by the window if you don’t wish to be seen.

“Have you been waiting long?” Jonesy asked breathlessly. Another one of Jonesy’s quirks is that he refuses to use public transport and instead prefers to either walk everywhere, as in this case, or catch a cab.

“No, I just got here actually” I say as I rose to greet Jonesy. It’s true, it’s only been five minutes.

As we sit down, Jonesy tells me he’s starving and tucks into the bread and butter offered while I stick to my water. I had already decided what I was ordering having looked over the menu at lunch.

Jonesy wants to get a burger.

“I’m not judging you,” I say with an unmistakable tone, “but you know if you get the ox tongue to start and oxtail for main, you would be eating from nose to tail?”

But Jonesy wasn’t having any of it. Clearly the Bohemian spirit from the ICA party the night before had caught up with him and he needed something comfortingly normal. So we both went with the chicken liver and foie gras parfait with grape chutney and toasted brioche to start. I’d like to think that I inspired Jonesy’s choice actually but I’m sure he will deny it. The parfait was great though, perfect you might say. And the grape chutney wasn’t half bad either except I kept imagining that they were mini pickled onions, which of course they tasted nothing like.

For main, Jonesy stuck to his guns and had The Ebury burger while I went for the confit rabbit leg with parmesan gnocchi, roast artichoke and tapenade sauce. I am probably mistaken but I detected a bizarre hint of soy sauce in my main, which in all honesty could have just been the complex fusion between the tapenade and the artichoke. The rabbit was fabulous, as was the gnocchi. It’s been some years since I last had rabbit and all those things you say about meat literally falling off the bone were all applicable here. Jonesy munched his way through that burger in no time at all so I guess that means he’s given it the thumbs up too.

Then it was on to dessert.

I have a mouth full of sweet teeth and Jonesy has precisely none. I was sure he was just entertaining me when he suggested getting a dessert so I could have two. It was too perfect to be true. Not so. Jonesy nibbled at the apple and Guinness fritters, probably so I would feel less greedy, before pushing the barely touched plate towards me. How could I resist? That said, after finishing my rhubarb crumble I was more than stuffed. Still, I made an attempt at it but try as I might, I couldn’t finish it.

In the end, I had to admit defeat and waddle out making extra room for my satiated stomach. No matter how good it was, finishing three whole courses plus an additional dessert was an impossibility for me. That’s not to say that I won’t be back to try again, of course. And next time I might wear my pearls.