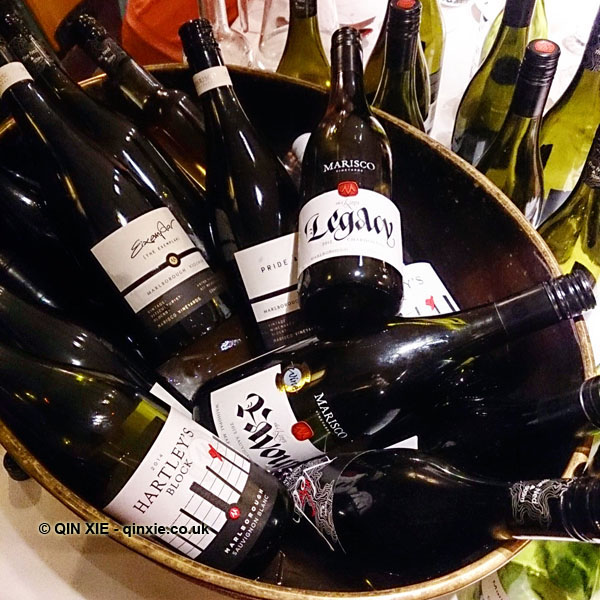 My first taste of the 2015 vintage came from Marlborough, New Zealand, from the Marisco Vineyards. I tasted through part of the Marisco portfolio at The Merchant’s Tavern with owner and winemaker Brent Marris.

Having tasted through a whole bunch of mostly okay, occasionally mediocre, 2014 vintages from other parts of the world this year, the 2015 from Marisco made a refreshing change. It should come as no surprise really – Marris has been in wine all his life.

Brent’s father, John Marris, had been one of the first contract grape growers for Montana (now Brancott Estate) in Marlborough. Following in his father’s footsteps, Brent went on to study oenology and made wines at Oyster Bay before creating Wither Hills. In 2003, on the 300 or so hectares of land on the banks of the Waihopai River, Marris established Marisco vineyards. Wine must run in the blood as his eldest daughter is also studying oenology with a view of joining the family business in the future.

But back to the wines. We tasted through 14 dry wines before dinner and three sweet wines with dessert from The Ned, The King’s Series and the Craft Series. There was also a Hartley’s Block Sauvignon Blanc. For ease, I’ve divided the tasting notes into their respective brands, followed by the sweet wines, rather than in the order tasted. There are a lot of notes and some stories too so brace yourself and read on.

The Ned, named after the mountain which overlooks the Marlborough region, was the first wine brand created at Marisco vineyards. Marris wanted to make the stripped-back style of Sauvignon Blanc that first made Marlborough famous. And in the beginning, he worked exclusively with Sauvignon Blanc, Pinot Noir and Pinot Gris.

We started with The Ned Pinot Noir Rosé 2015, a tank sample which will be bottled in July. It’s apparently Marris’ first attempt at rosé at Marisco and it’s made with Pinot Noir grapes grown specifically for this wine. It’s a very dry style, and at times a little hot on the palate, with vanilla and red fruit notes. It offered nice structure though and was generally quite elegant.

The Ned Pinot Grigio 2014 (sold as Pinot Gris in New Zealand) had a sort of onion-skin blush to its hue, which was apparently achieved purely through viticulture. It was a light, crisp and delicate wine with lychee notes coming through. I also tried a tank sample of The Ned Pinot Grigio 2015, which, with its slightly pinker hue, was much fresher with a crisp apple nose and a citrusy profile.

The first red wine came in the form of The Ned Pinot Noir 2013, a cool-climate style Pinot Noir with a slightly spicy palate. There was a delicateness about it with notes of strawberry and vanilla over the gentle tannins. It’s a very likeable wine and I preferred it over the 2014 vintage. The Ned Pinot Noir 2014 was hotter on the palate with more tannins coming through. The fruit felt riper though and with great intensity, finishing with a slight hint of vanilla on the long finish.

The Hartley’s Block Sauvignon Blanc 2014 came in the middle of the tasting and was the only wine from the brand. It was quite rounded for a Sauvignon Blanc (in contrast to the occasional sharp acidity) with a light, peppery palate and delicate nose.

The King’s Series is a celebration of the Marris family name in the 12th and 13th century – De Marisco. Initially the family was in favour with the king but later, over the generations and as a result of piracy, they became a thorn in the king’s side. These were different kings obviously. Each of the wines in The King’s Series plays on this history of the Marris family – although it doesn’t literally translate into the style of the wine. Or does it?

The first wine we tried in The King’s Series was The King’s Thorn 2013, a lychee-rich wine with a short finish and perhaps in need of a little more acidity. The King’s Favour 2013 came next. It had distinct farmyardy notes with a very delicate palate, lots of minerality and notes of apple and lime. I’m not sure if it was because of the name but I really liked this one. The King’s Legacy Chardonnay 2012 (sold in the USA as The King’s Bastard) was a very light, citrusy Chardonnay, fermented and aged on the lees (with the yeast) in barrel.

On to the red wines we tried The King’s Wrath 2013. It was a herbaceous red wine with more prominent oak notes coming through and slight hint of development.

The Craft Series is the latest brand to join the Marisco portfolio, having launched last year, and is a more artisan selection. They were made on the principle that certain vines were showing exceptional characteristics which Marris wanted to capture. The result is a collection that’s intended to be for people who are really into their wines, know their stuff and isn’t afraid to try something new and interesting. I hope we’ll see these in the UK soon but they’re not widely available yet.

The wines came towards the end of the tasting starting with Brent’s favourite, The Craft Series Sauvignon Blanc Pride & Glory 2011. Like The King’s Favour 2013, this wine had the same farmyardy notes with apple, citrus, a hint of pepper but finished with a little lychee. It worked really well with the sea bream ceviche I ordered, which was surprisingly spicy, so I think it will comfortably work with other spicy dishes too.

The other white wine that I really liked was The Craft Series Viognier The Exemplar 2012. It was quite unusual for a Viognier in that it lacked the signature floral character of the grape variety. Instead, I got notes of sweetcorn and asparagus thanks to the barrel fermentation. It was quite a bold palate and maybe takes some getting used to – but I think that’s one of the reasons why I liked it.

The Craft Series Pinot Noir The Journey 2013 was restrained and elegant with a herbaceous character, black pepper and lots of tannin. It feels too young to drink right now but there’s potential. The 2014 vintage will apparently be divided into a feminine and a masculine wine as the parcels are so polarising.

I’ve actually tried sweet wines from both The Ned and The King’s Series without ever realising that they’re from the same winemaker. Tasting them side by side, the difference is even more obvious.

The Ned Noble 2013 had a slight petrol note with highlights of citrus peel, tangerine and a floral quality. There was nice intensity and good acidity.

From The King’s Series, it was two vintages of A Sticky End. A Sticky End 2012 was more earthy while A Sticky End 2013 was much cleaner on the nose. Both, I felt, needed more acidity and, next to The Ned, didn’t show as well as they could have.